We are working on natural language games, you can go check them out here: www.lablablab.net!

Tired of doing all the work in video games? Here’s a game focusing on what counts: the system. No moving a little guy around, jumping, shooting or tediously managing an inventory. Game designers around the world have always kept for themselves the delicate pleasure of parameter tweaking. The Silly Simulation series finally brings it to the masses, wrapped up in accessible pop culture fantasy fiction. 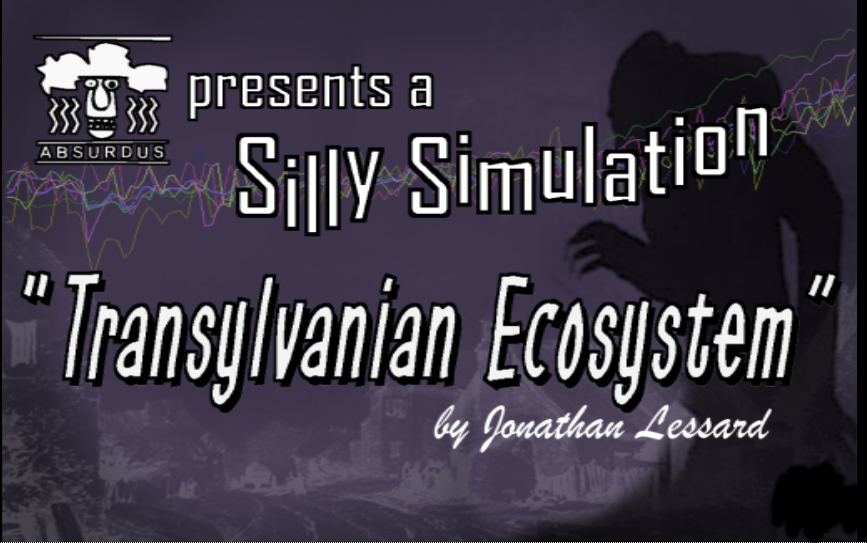 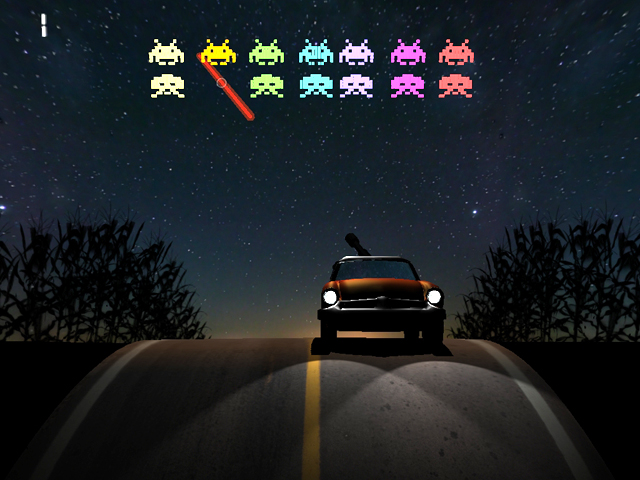 A small summer prototype experimenting with the following ideas:

The point is killing the most invadeurs (sic) before you get abducted or have a car accident.

The pinnacle of class is to do so while improvising a beautiful dorian song.

Here’s our submission to the 2010 Gamma IV “one-button-game” contest. It didn’t make it to the finals (there were over 150 entries!) but we still find it amusing. It’s a one-button-game, so launch the game and push your favorite button, they all do the same thing! 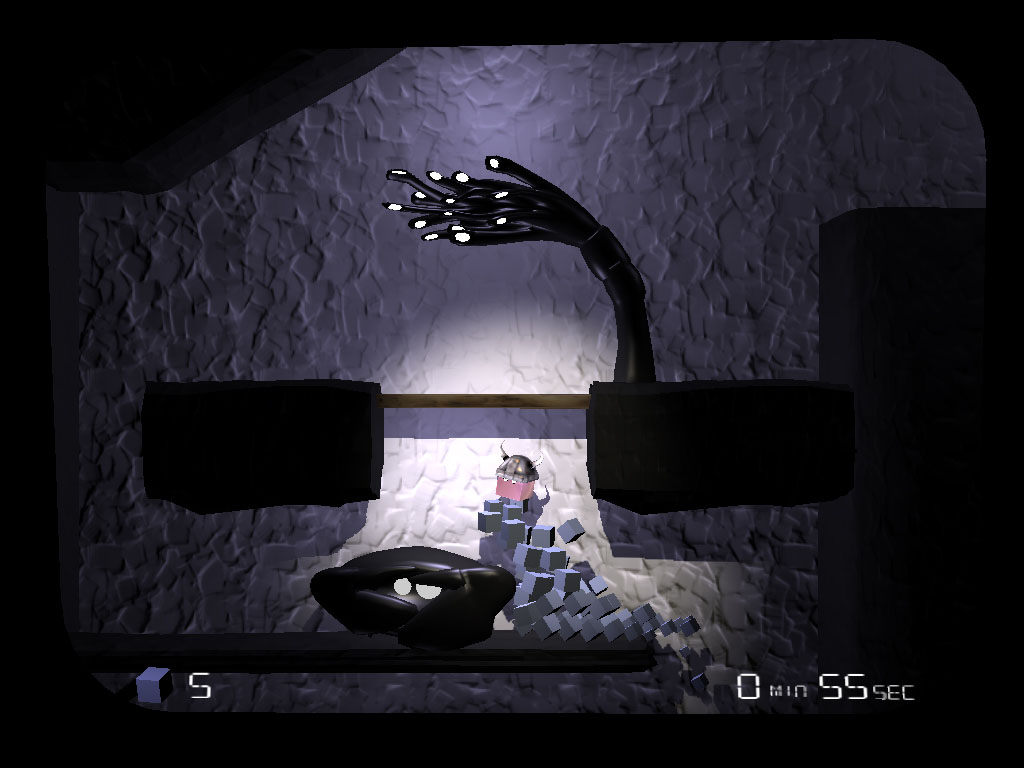 Your are LeCube formerly KingCube. The Gods have thrown you in Tartarus for your overwhelming hubris. You got knocked down but you’ll get up again. They’re never going to keep you down! Escape from Tartarus so that you can claim your title back and proudly shout : “I’m the king of the cube!”

Yet so full of rage and ambition might you be, you’re still only a cube. You’ve got no legs to run and jump no mouth to eat mushrooms and no hands to throw fireballs. So what can you do? Powered by your infinite self-love you can produce small replicas of yourself out of your own pure volition. When appearing beneath you these temporary cubonculi can push you forward to victory!

By timing with THE button the apparition of the cubonculi and exploiting the natural and physical variations in orientation of LeCube, it is possible to navigate around any obstacle. You’ll be amazed at how efficient you can become with some training at navigating this inept being!

(KingCube isn’t very optimized, so it might not work on older computers or cheap laptops)

Absurdus’ Magnum Opus, the Kraken Trilogy, will soon be completed with the release of the last episode: The Eight Tentacles of the Apocalypse. You can consult the games’ official websites for more information.

The Glutomax will take a week before arriving at Hyade Island. Until then, Abdullah will have to discover which of the suspicious and anachronical passengers has stolen the Eye of the Kraken. This is a very important task for if the thief makes it to the Island, he’ll have the power to awake the Great Kraken and then rule the world. That would be bad. (Download for free!)

Raised in a small town bourgeois family and recently graduated from college in humanities, Edgar Delacroix has yet to discover what the big city has in store for him. After a fortuitous entry in the world of private investigation, he has to deal with twisted and suspicious individuals, solve sinister mysteries and risk his life in rather unpleasant circumstances.. (download)

The Eight Tentacles of the Apocalypse (2010?)

Will Abdullah find the Eye of the Kraken before Mérouh Baròk and his sidekick Rasputin (yes, the one)? Will they awaken the Great Kraken? Will Edgar discover who killed Gaspard Lemaître, his boss and mentor? Will he finally taste a schnitzel with apple sauce? All these questions will be answered in this improbable trilogy’s explosive finale.

This shader automatically adds dust to any model with any material and independantly from UVs. It is based on the assumption that dust deposits on surface of the model facing up (so your model’s Z vector should face up) and in interstices (AO)

It comes as a Blend material, simply replace the first material with your own.

Here are some exemples of what it looks like (scenes by Jeff Patton): 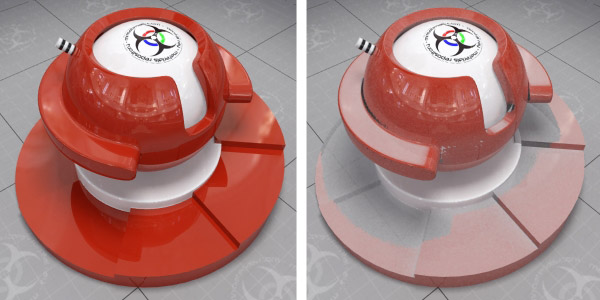 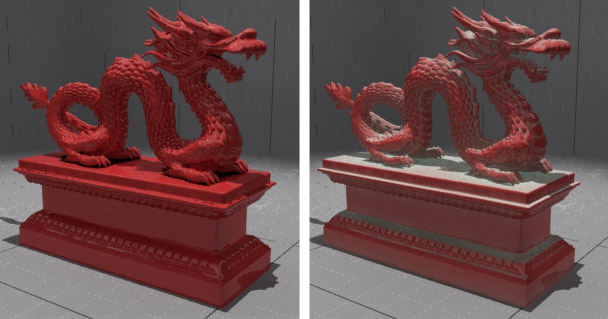 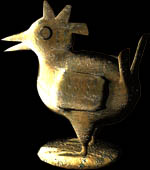 Aren’t you tired of those bland and tasteless trinkets that are collecting dust on the edge of you hearth? Throw them away and show your real colors with the Howling Poultry. What could be better than a ton of rock cut in the relative shape of a chicken in your living room to communicate without ambiguity your sympathy towards animist cultures?! Your grandchildren will love this new pet and admire your “rock” attitude.

This one certainly smells fishy. This old rotten herring will please even the pickiest prankster. Replaces admirably smelling salts. 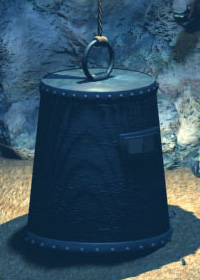 Life is scary? Your neighbors suspicious? The Income Department is after you and the weather announces the Apocalypse? In these troubled times, it is good to know that genuine peace of mind is still possible. With this water-proof bell, 30 cm of solid iron protect you from the hostile world and you can finally sleep on both ears! 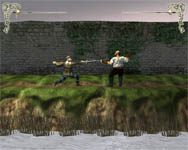 Épée is a fencing game prototype in real-time 3d. We didn’t find the experiment conclusive enough to develop it further, but we haven’t abandoned the idea of ever making a good fencing game.

Meanwhile, you can still try it out for free.